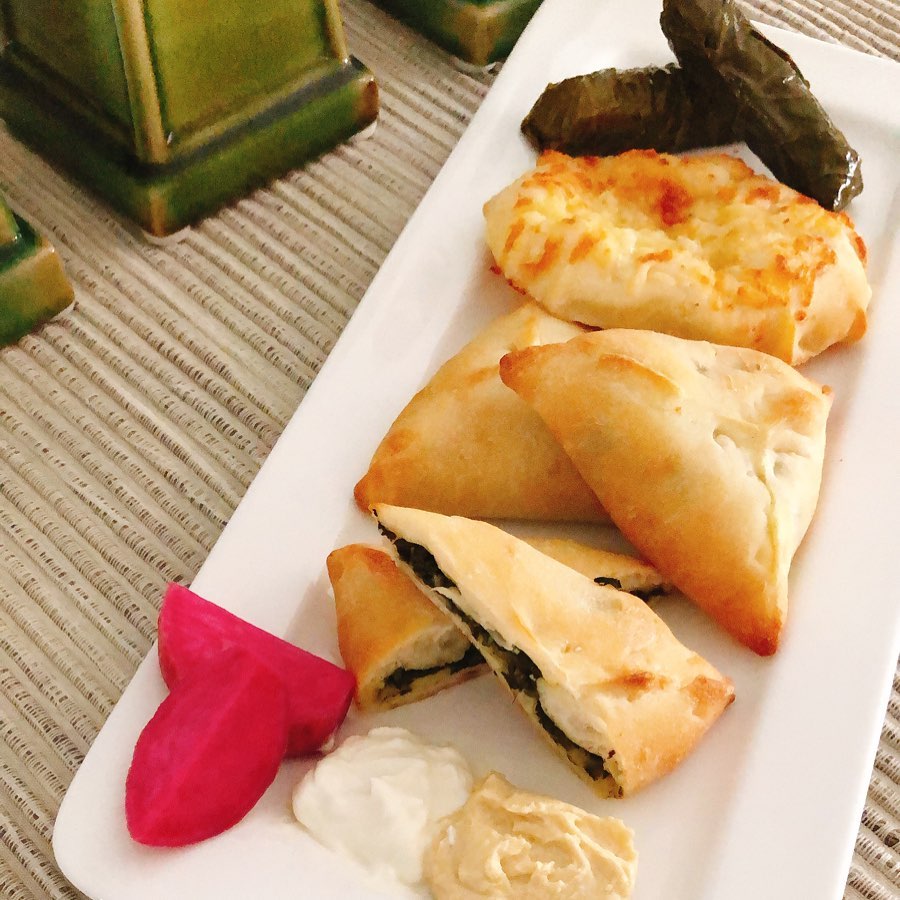 LF: Blue Oyster Mushrooms -  I cook, but I am no chef extraordinaire. I really wanted to try these “fancy” mushrooms, but they look so beautiful that at first I found them intimidating. Still, I googled a few recipes and went for it. I chose the Blue Oyster initially because they looked so pretty! I browned them in a fry pan with a combination of olive and coconut oils… I must say, I was pleasantly surprised at both myself and the mushrooms! They had a somewhat dense, “meaty” texture and their earthy flavour was enhanced by the oils. 10/10 would try again. No more fear of The Reaper.

RG:  Beef Samosas - At first I didn’t know what to expect, in their pictures they look crispy. But when I picked one up, their coating was tender, not dry. And biting into their stuffing was so satisfying: it’s rich, well-seasoned, and juicy but not too juicy. As a pierogi-maker, I appreciate a good gluten-y shell stuffed with different kinds of filling… and allow me to say that these are some of the best gluten-y shells stuffed with meaty filling that I’ve ever tasted! I’m super excited to try the veggie ones!

LF: I like salad, but I don’t really like preparing salad. That probably sounds weird, coming from a vegan, but it’s true. I find salad prep tedious. Wash lettuce? Ugh. I’ve started taking the lazy route and just mixing a few different packs of microgreens together, giving them a rinse and a shake - and presto! - a salad packed with nutrition and flavour. My favourites are broccoli, oriental mustard, purple basil, and cilantro. Sometimes all together, sometimes any combination of the bunch, usually drizzled with a nice dressing of olive oil/ maple syrup/ old fashioned mustard/ apple cider vinegar/ ginger.

RG: Pretzel Buns & Cinnamon Potato Bread - You can eat these by themselves, as bread for your egg and ham breakfast sandwich, with mustard as a snack… I could go on. They’re made with brown sugar, which gives them a richer flavour than average yeast-y buns. And hands down my favourite things about the Market is packing Nat’s Cinnamon Potato Bread. Because of this load, the “Bakery” section of the Market smells so mouth-watering (cinnamon, raisins, fresh baked yeasty-ness) on a Saturday morning. And the bread feels weighty, you kind of just want to hold a loaf of it. Three pretzel buns and a cinnamon potato bread is exactly what you need for the week.

RG: Ready-to-Eat Vegetarian Curry & Roti - The star of the show in this dish is the Roti (Laura will agree). It’s round, crispy, and buttery. Tear a piece of it and scoop out some curry, that is light, tomato-ey, and filled with other veggies. The only reason why I don’t get this every week is so that I can try other things.

LF: FROZEN Roti & FROZEN Spring Rolls - First of all, Juliana and Jeff are some of the nicest people you will ever meet. Secondly, ROTI. I’m salivating just thinking about it. I highly recommend trying some of the frozen roti AND the frozen spring rolls. I hadn’t tried roti until late last year. That means that for 36 years I was missing out! It can be savoury or sweet; equally enjoyable on it’s own or with a sauce/dressing, curry, fruit salad… whatever the heck you want to try. I even enjoyed it baked (it’s much lighter on the stomach without the oil, but does lose some of the enjoyment of being able to peel apart those delicate layers.) Speaking of baking vs frying, I decided to try taking home the frozen spring rolls and baking them in the oven as well. I wasn’t disappointed. While they do come out more dry than they do when fried, they’re still tasty. And to overcome the dryness, I bake them with Snell House Foods Sweet Maple Baked Beans…

LF: Sweet Maple Baked Beans - Have I mentioned that I’m cool with putting a variety of foods together in one bowl? Honestly, I could eat just about anything as if it were a taco bowl. (Cranberry sauce, baked beans, and sweet potato tossed on top of my mixed greens salad? Sure!)
I promise you this isn’t a weird combination, though. Put 3-4 of the (from frozen) Snack O Shack spring rolls in a pan with the Snell House Foods sweet maple baked beans for 10 minutes in the (toaster) oven at 425F. It’s a great little meal after having been on your feet at the market for 7 hours. Quick, easy, satisfying, and delicious.

LF: Hummus -  It’s creamy and delicious. Every time I’ve got this hummus, I’ve emptied the container within 2 days. Raw veggies, corn chips, or just a spoon. The vessel doesn’t matter, the hummus does. This is a 10/10.

RG: Hummus & Zatar Chips - I totally agree with Laura. The hummus doesn’t last long. Neither do the chips - especially if they’re paired with Snell’s Cilantro or Garlic Salsa.

We hope you enjoy these as much as we have!